This June in Prague... 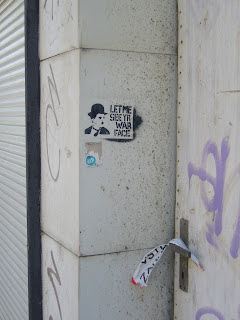 This was painted on a wall in the little "village" where I live. There is about 3 blocks of shops, etc. here and it doesn't appear to be some sort of hotbed of political activity or anything. So I was a little surprised when I saw this. I'm not sure what it is connected to or supposed to mean (if anything) but naturally, as an American - what with the iconic image of Charlie Chaplin and the mention of war - I figured it was something directed at me, or should I say "US".
George W. was here this week, as I'm sure you all know. A friend of mine went to the protests to observe and said that she was upset. She reported that there was "only about 200 people" on hand (I'm not sure if that meant she expected more or less?) and that there was someone - he said he was a veteran from a recent US military conflict - that was severly criticizing the president, America, the military, etc. What upset her was not what he had to say, whether it was true or not, but was what another friend of mine would call the wide oversimplified "painting with a broom" that he was doing of some very complex subjects. (And forgive me, I realize that to some extent I am doing the same here).
But about this guy...he was upset. He was hurt. Maybe he even felt betrayed by his government. This is understandable. But to say that certain US entities are "the worst in the world"....??? Based on what? All of his only 24 years on this planet? His in-depth study of ALL the world's organizations? My friend and I agreed that it was easier to respect someone's point of view, even if we disagreed, when they took the time to state things fairly and - dare I say - even humbly.
Would he have said, "I realize I am young and have had no first hand contact with the...armies, prisons...governments...(fill in the blank to your choosing) of the vast majority of nations in the world, but nonetheless, based on what information is available to me, and my own first hand experience with the US ...."institution-of-choice"...I have come to the conclusion that they are the worst in the world"....THAT kind of statement would have earned my respect and caught my interest to hear more of what he had to say.
But that kind of calm reasoning doesn't make the news. I know. Even without my limited professional journalism experience, just the most surface perusal of today's headlines, I know that so often it is the screaming extremist (from whatever side, it doesn't matter) that sells papers. It is the extremist that gets people fired up, whether they are at the protest rally or in the church. I have been that extremist at times, I am sad to say. (And can still be? A work in progress...walking in grace...forgive me).
But you know what? That wasn't Jesus. He only got fired up (to my recollection, let me know if I'm forgetting) at the religious hypocrites that defamed God's name with their false religion that burdened the people and actually kept them from a real relationship with God. But the everyday person...the woman caught in adultery, the tax collector, the grieving sister, those broken and hurting and lacking faith...with those he spoke calmly, in love and with compassion.
A friend of mine has a great blog that spoke about the problem that Christians are known more, so often, for what they are AGAINST rather than for what they are all about or "for". He had another more recent post where a great preacher was railing against a teaching in the American church that horribly distorts the Gospel. Those are things to rail against! Those are things to be extreme about...religious hypocrisy and heresy. (check out those posts at Jake's blog).
But sinners? Broken people? I have been so blessed lately by various people being very kind and encouraging to me in the midst of correcting me...of helping me to see my weaknesses...of leading me in paths that maybe I am uncomfortable in but that I know are good for me, glorifying to God and ultimately I will be glad for. Those people are here on my team in Prague, on the pages of books I am reading, on the MP3s of sermons by my Pastor in CA that the church sends to me, and on the various blogs of dear friends of mine.
So, another rambling post by me...what else did ya expect? :) LOVE you all...
Posted by Cara Denney at 1:36 AM

Keep rambling....it's the next best thing to hearing you in person! :)

yeah... but our president has alienated most of the world, and also is a big jerk. love, k

...good to hear from you k. :) "Veggies"! :) I'm not sure I completely agree with you, BUT glad to let you have your say...sorry your comment didn't get up earlier...I have to get the "screen" for comments off...can't figure out how to do it...cuz sometimes they get buried and I don't realize they haven't posted yet...anyway...love you too :)

Cara - I should read this more often - extreme statements exist because they work. They get heard, or at least less ignored. In a world where most of us are overwhelmed with our daily lives - we only lift our heads at the loud and the angry. The soft voice of hope and encouragement is missed by most of us. I need to stop more often and listen to the reasoned voices that are there.