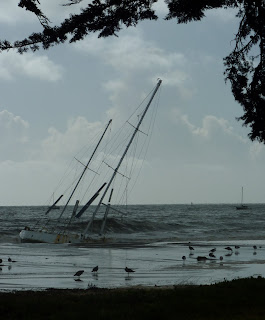 So, these kinds of things always happen to me. :)

I had just gotten out of my car to take a picture of a sailboat that had run aground on the beach in Santa Barbara. I don't know what happened, but because the area was having some of the worst storms in quite some time, it wasn't too much of a surprise. The streets were littered with huge palm branches that had been blown free from their towering trees. Streets and lawns were flooded and everything in this celebrity locale known for keeping up appearances was quite out of sorts.

There was an ambulance at the ready (not that I saw that anyone had needed it) and many other "Lookey-Lous" like myself taking pictures and taking in the sight. It was quite impressive. Here was this beautiful, lithe boat stopped, stuck in the sand, just sitting there like the subject of a painting by one of the great masters. But, and I know this is silly, because it was still upright, it almost seemed as if it was letting itself be pummeled by the waves. It seemed that at whatever moment it might choose it could simply pull away from the shore and sail confidently back out to sea. Of course this wasn't to be, but that was the feeling I had, something of grace and dignity about this tragic event. 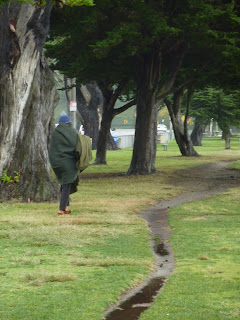 s happen to me) a woman shuffled by swathed in one green army blanket and carrying another one over her arm. She mumbled something and I said "Excuse me? What?" (which I suppose probably explains the reason why these things always seem to happen to me.) She came closer and at first I thought she might be homeless. I couldn't really see her clothes under the blanket, but she wore new looking soft suede deck-shoes. (The shoes usually are the clue). Homeless or just California eccentric? Who knows. Here in Santa Barbara, where "artists" of all types abound and homeless folks once registered to vote using a huge historic tree near the train tracks as their address, anything is possible.

She walked on past me and then abruptly turned around and - with one hand half-covering her mouth and the other still clutching her blanket - she started in.

"This! All...this!" she proclaimed with a wide expansive wave of her hand, blanket still in hand. "So, so, so much....things, and material, and, so much, just material stuff. And you know, just abandonment. Abandonment! Just abandon it all to, to, to the ruler, the ultimate ruler, the ruler of everything, and just abandon, just abandon to Jesus".

Then, just as abruptly, she stopped, slapped her free hand over her mouth and - sort of smiling, sort of sheepish - she said "but then, maybe YOU are the owner! Maybe that's your boat! Oh no. Oh no. Oh no." But she was smiling and even laughed a little. It was actually cute.

"Oh no. I'm with you all the way" I quickly added. "Sad, what happened. But I get your point - abandon yourself to God".

With that, she shrugged her shoulders, palms upraised, turn and walked away. And I took a few more pictures. This kind of stuff always happens to me. 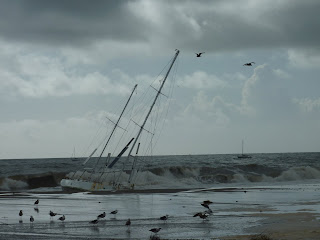 What an amazing story. Cara, it is so good to hear your heart. The love of God fills you up. I am thankful you are healing and that cancer was not in sight. God has blessed you in so many ways. I am thankful to know you Cara, your picture is beautiful, you are a beautiful girl. God bless you.

love you Cara and love hearing your stories. You wouldn't be you without these things happening to you.

Here is my blogspot for our son Noah's journey to the family.