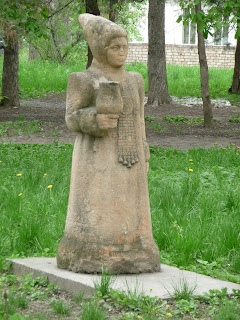 In the center of Bishkek there is this great park filled with statues. Most are of traditional Kyrgizi images, like this woman here.

I don't know if she would be considered "Aedjae" or not, she looks a little young. :) 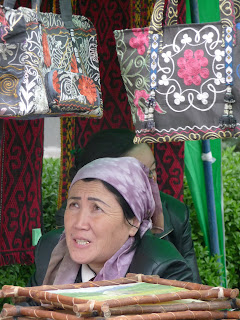 Sometimes it's just "Aedjae" and sometimes it is added after the name, like "Cara Aedjae". :)


In Ukraine I felt like women were called "devushka" - the Russian word for young lady (older than girl, younger than woman) for as long as possible! I was regularly called "devushka" in Kyiv, even though I knew I was quite past the actual age intended for that title. [Grandmas are called Babushka, and those in between called "Teute" ('toy-teh'), or "Auntie".] 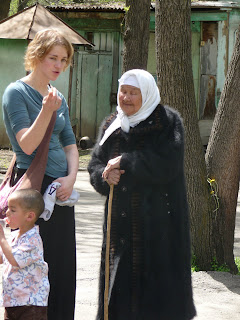 This is Melanie (Markey) Billings, (a lovely "devushka" and wife of our pastor Paul), with one of our Babushkas.

But here I am actually happy to be called Aedjae! The reason is that it means that I NEVER stand for very long on the busses or marshrutkas (mini-vans crammed full of people used for public transport here)! It's great! ha! :) Sometimes middle-aged men will actually tell young men -who haven't already stood for me - to get up 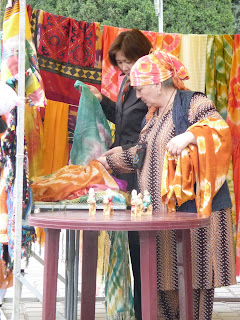 and give "Aedjae" a seat! ha! After standing squished like a sardine on the marshruthkas in Kyiv it is pure heaven to be able to almost always sit here. 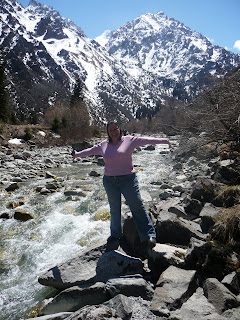 service up and running here (THANK YOU, ZHENIA!!!). The usual internet services here charge by the downloads and are very expensive, so this is a huge blessing and means I will be able to make some more updates on my summer here in Bishkek. Thank you all for your love, prayers, and support.

(The mountains just outside of Bishkek, taken last Spring).
Posted by Cara Denney at 10:52 AM

Hi Cara, It looks like there are some amazing places in K. You sound happy and I'm glad u r getting seats on buses =) Take care my friend

Hi Cara
I was just scrolling through your posts. It's so great to see you having a wonderful time there in Biskek. If its not too late, buy some of those beautiful bags I saw in the one picture and bring them home. They look like some of the very expensive bags the girls have been making out of patterns and fabrics by Amy Butler.
We are praying for you sweetie, and can't wait to see you when you get home!
Love you!